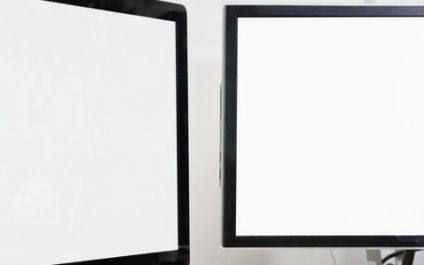 Small businesses are always searching for ways for their employees to be more efficient computer users. But before you go out and buy bigger hard drives and faster processors, you should consider upgrading your desktops to a dual monitor system. Read on to find out about the advantages of using two monitors per desktop.

Published studies conclude that by working with dual monitors, overall productivity increases by 20-50%. Computer programmers, for example, can use one screen for source coding and the other for programming; by using dual monitors, they no longer need to toggle back and forth between tabs. This reduces error and frees up time to complete more projects.

This reason resonates with jobs that call for creating newsletters or PowerPoint presentations. Dual monitors would eliminate the need for alternating between tabs and scrolling up and down as you work. Also, the enhanced visibility reduces chances of making mistakes and thus losing more time fixing them.

With dual monitors, the days of stacking numerous editing tools on top of the image or video you’re working on are long gone. Instead of your screen looking like a game of Mahjong, you can put the editing tools on one screen and leave the image on the other. With better visibility, you’re less likely to commit errors and more likely to be finessed, and you’re not sacrificing valuable working time in the process.

You want to buy a camera, and you have two models in mind. It’s time to make a decision, so you have to compare their specs. If you had only one monitor, you’d need to go back and forth from one tab to another. But if you had two monitors, you could view the models side-by-side to help you clearly see their differences and make an informed purchase.

Dual monitors benefit almost every industry because of the enhanced visibility and larger screen space. All FelinePC computers support at least two digital HD monitors out of the box. Please get in touch with us today if you want to upgrade your office computers to dual monitor systems.

IT Services
Industries
Company Blog
About Us